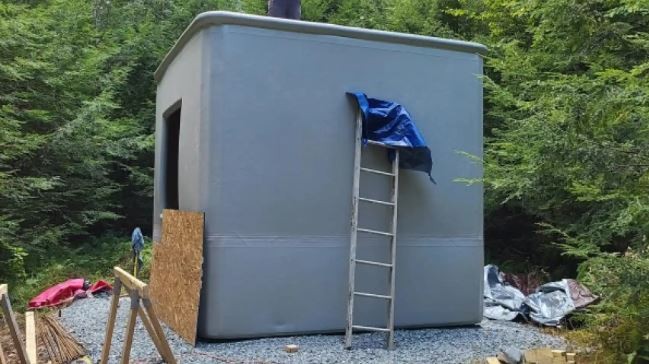 The price of housing is a hot debate in Spain at the moment, but also a problem in the rest of the world, where population growth and natural disasters require cheap and fast construction. Solutions to this problem include 3D printed houses, modular buildings, the use of robots and the latest idea: inflatable concrete houses.
The UN estimates that by 2030, 96,000 affordable houses need to be built every day for the 3 billion people on Earth without access to decent housing. Being able to build the structure of hundreds of homes in a few days would speed up the process and reduce costs.
Automatic Construction is demonstrating that its new way of building with concrete can cut construction time in half. Its proposal has been dubbed Inflatable Flexible Factory Formwork (IFFF), which involves shaping soft concrete into the shape of a house using an inflatable mould.
The idea was forged in the year and a half during which the New York-based startup has been developing its technique to lift the air mould and concrete structure in minutes, something that usually takes months of work. The company estimates that a house can be erected in less than an hour and costs around a fifth of the usual price using more traditional concrete construction methods.
How does it work?
As an inflatable system rather than a heavy construction of panels and fasteners, the formwork is erected in minutes. Instead of wood or metal, it is made of flexible plastic or PVC fabrics with reinforcements and 3D printed internal structures. Two structures are inflated: the internal or shoring structure, which supports the weight of the roof, and the external structure that receives the concrete.

Inflatable concrete houses Automatic Construction
Everything is placed on a firm base, which can also be concrete, and the formwork is inflated. Once the form is inflated into the shape of a structure with walls and roof, the mixed concrete is pumped from a truck into the second structure. During this process, air is extracted from one side, while the other side is filled with the mixture.
If you are wondering how an inflatable structure can support an entire concrete wall until it solidifies, stop imagining a bouncy castle for children. The walls of the formwork are 10 cm thick and filled with tens of thousands of polyester threads, similar to those used to make paddleboards or kayaks. For now, the company is using virgin PVC, but it is possible to switch to recycled PVC, they explain in an interview with Fast Company.
Focusing on the latest sustainable construction techniques, the company uses environmentally friendly materials. For example, the concrete they use can store carbon and help reduce greenhouse gas emissions around it. “We use local ready-mix concrete, aircrete, sustainable cement and other pumpable building materials,” the company explains.
The house takes about 15 minutes to inflate and a little over an hour to fill completely with concrete, but the mixture needs a couple of days to solidify properly and become a safe and strong structure. The shoring system can then be deflated and removed for reuse in other constructions. However, the outer part of the formwork remains on the structure after the concrete is placed, acting as an insulator, “providing integrated waterproofing and an airtight barrier for unmatched heating/cooling performance,” says the startup.
First prototypes
The final result is not yet visible, as cladding and insulation materials also need to be installed to achieve a more traditional look. The interior walls will be plasterboarded and the reinforcements for the concrete can be installed on site or pre-installed at the factory.
Thus, the construction of the building would be carried out at the company’s premises, then moved to the site where the building is to be placed and the installation is done there in a few hours of work, leaving no waste or excessive disturbance to the environment. The result is a raw skeleton, which must then be covered with the rest of the elements of a house, but saving much of the initial preparation.

Exterior of the inflatable structure with concrete Automatic Construction Omicrono
This new construction technique is patent pending. So far, the company has built several prototypes with a 30 and 60 square metre structure, and is now working on two ADUs (accessory dwelling units) and a 198 square metre one-storey house in New York.
Reducing costs
Among the advantages the company mentions about this new form of construction is that, in addition to being a faster system, it reduces the labour required and the waste of materials such as wood, which is usually used to form the mould.

Concrete mixing truck Automatic Construction Omicrono
The New York housing they propose to inflate would cost between 10 and 30 dollars per square metre. A price that only includes the basic structure, but which would be 80% cheaper than the traditional system, according to FastCompany’s calculations of the US construction market.
The company proposes to use it to build houses as well as tunnels, swimming pools and other infrastructures. Thanks to its cost and time savings and ease of use, the technique would have a variety of applications. The system will be particularly effective in areas where housing needs to be built quickly to provide shelter for victims of natural disasters who have been left homeless.
Another option is the use of this technique outside the Earth, for example on the Moon or Mars. Now that space agencies in several countries are working to take astronauts there to live on the surface, they are looking for new construction techniques that are quick and easy to transport or manufacture. 3D printing is one of the most viable options on the table, but Inflatable Flexible Factory Formwork (IFFF) could beat it to the punch.
By El Español Diario.